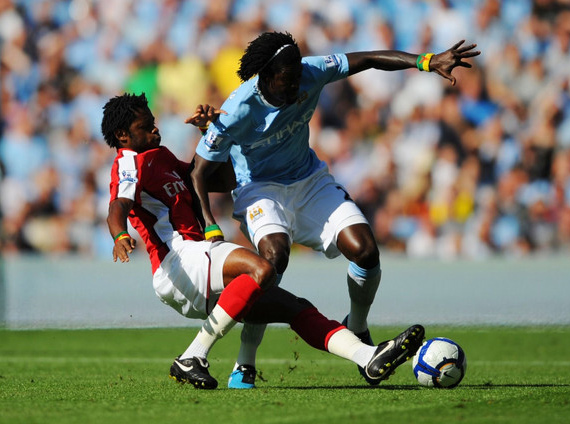 After a couple weeks of sloppy punditry and ill timed posts, I have returned to step my game up for the ass end of the season (I’ve always been an ass man)… and what a weekend to pull the finger out for!

Along with battles for the title and relegation shit fights, there has been a huge amount of focus on the much sought after fourth and final Champions League spot that is still up for grabs, amazingly by four teams! My focus this weekend however takes us to Arsenal’s Emirates stadium in what will not only be a battle of the Emirate Arab shirt sponsors, Emirates (Dubai) v Etihad (Abu Dhabi), but also the return of Emmanuel Adebayor to his old stomping ground… aka. Round Two mother f*cker!

After celebrating like a right royal jack-ass when scoring at the Midlands last September, I look forward to seeing how the Togolese bean pole is received by Arsenal fans this weekend (more so than the match itself), however on a footballing front, I fear that the Gunners just won’t be equipped to handle what the Citizens throw at them (possibly spears?) and unless poster-boy Robin van Persie steps up and takes this match by the scruff of the neck with a hat-trick Arsenal could well be pulled into that fourth place show down for the final few rounds of the season and that’ll be tighter than a nun’s nasties!

Here’s how I picked the rest of ‘em: